Our periodontists in London are here to help identify and treat periodontal disease which is one of the most widespread diseases across the world. However, it is preventable and can be easily treated when it is found early enough.

Periodontal disease is another name for gum disease, which is caused by bacteria that collects at the gum line in the form of dental plaque. The plaque needs to be removed by brushing and cleaning between the teeth twice a day. If not properly cleaned, the gum starts to come away from the tooth - forming pockets that allow the plaque to grow below the gum line. 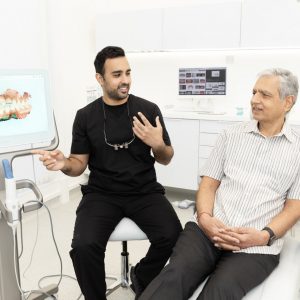 The stages of Periodontal Disease

There are two major stages of periodontal disease - gingivitis and periodontitis. The earlier stage (gingivitis) is a mild form of gum disease caused by plaque build-up around the gum line which causes inflammation of the gums. If you neglect to brush or floss your teeth daily, this plaque build-up will trap bacteria and cause gum disease. Your gums will appear red and swollen and you may experience bleeding when you brush or floss. If properly treated, it may be reversed.

Left untreated, gingivitis turns into periodontitis. During this more destructive disease stage, the supporting bones and fibres that hold your teeth in place have been irreversibly damaged, as bacteria penetrate the deeper pockets of tissue. If the bone that supports the teeth is destroyed, the gums shrink and eventually the teeth become wobbly and fall out. 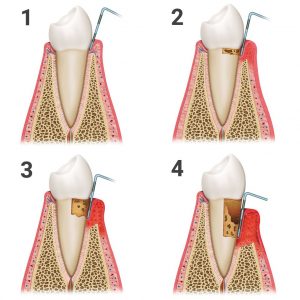 Who can get gum disease?

According to research, gum disease affects three-quarters of all adults over the age of 35 in the UK. Most people can get mild gum disease but some people are susceptible to more aggressive forms.

There are a few factors that put people at higher risk of getting severe gum disease.

If left untreated, gum disease can lead to bad breath, loose teeth and painful gums. The best way to avoid or manage gum disease is by practising good oral hygiene and visiting a hygienist at American Smile regularly.

In addition, some types of prescription drugs may also increase the risk of gum disease so please mention during your visit to American Smile if you are taking any of the following:

How do you know if you have a periodontal disease?

Periodontal disease is usually pain-free (sometimes called ‘the silent disease’), so you may be unaware of it until your dentist or hygienist checks for it.

Here are some ‘red flags’ - symptoms you may notice that should raise concern:

If you smoke or take nicotine products, this may mask the first symptom of gum disease which is bleeding gums.

What does periodontal disease treatment involve?

Treatment aims to reduce bacteria around your teeth and prevent the disease from getting worse. Generally though, treatment cannot replace the support your teeth have already lost.

What are the benefits of the gum treatment?

Your gums will be healthier and you may notice such benefits as:

We are currently offering free gum health check-ups.  During the check-up, our periodontal expert, Dr Suraj, will evaluate your gums for periodontal disease and recommend the appropriate treatment. You are welcome to book a slot to give your gums a full health check.

At our advanced dental clinic in Chelsea, Dr Suraj will help you through the screening as well as identify the best possible treatment option for your gums, should you need it. Please contact us to schedule an appointment if you are worried about any of the symptoms mentioned on this page.

What are receding gums?

Receding gums happen when the margin of the gum tissue surrounding the teeth wears away, exposing more of the tooth or the tooth's root. When gums recede, gaps can form between your gum and your tooth, allowing disease-causing bacteria to build up.

What are the symptoms of receding gums?

Exposed roots
Exposed roots are another symptom and can be extremely sensitive and uncomfortable. They are often a sign of periodontal disease, or can be attributed to brushing too aggressively with a toothbrush with hard bristles.

Loose teeth
When you are suffering from receding gums you may notice your teeth become loose, which can be attributed to bacteria and periodontal disease under your gums around your teeth. As receding gums worsen, the gum pockets deepen due to the loss of an attachment structure.

What can happen if gum disease is not treated?

Left untreated, gingivitis turns into periodontitis. During this more destructive disease stage the supporting bones and fibres that hold your teeth in place have been irreversibly damaged, as bacteria penetrate the deeper pockets of tissue.

If the bone that supports the teeth is destroyed, the gums shrink and eventually the teeth become wobbly and fall out.

What are the effects of periodontal/gum disease on my general health?

What is the link between gum disease and heart health?

Studies show that one of the biggest symptoms of gum disease is swelling or inflammation. When inflammation occurs anywhere in your body, including your mouth, it can lead to hardened arteries so your swollen gums could very well lead to a greater risk of a heart attack.

We have combined the inside knowledge and experience of American, Brazilian, European and British dentistry to bring you the most advanced, evidence-based techniques to design a smile you will love and be empowered to maintain.

American Smile Dentists
5.0
Based on 24 reviews

Tatiana Nikitina
22:47 18 Feb 20
I had a very pleasant experience at American smile - very detailed and professional consultation by Dr Christian Pintado who kindly... managed to see me on the day when he was fully booked. Very friendly personnel and great service with reasonable prices, not easy to find in London!read more

Diana Mift
17:11 11 Feb 20
A BIG thank you to the whole team of American Smile Dentists and specifically to Lepika for an amazing and relaxing time. I never thought a... hygiene appointment can feel like a 5-Star spa experience. Highly attentive and professional staff; very clean and comforting place; central location. Everything is just Top-Notch. I am actually looking forward to my next appointment. See you all very soon! Dianaread more

Sophie Reiss
22:09 26 Jan 20
I had a great experience at American Smile with Dr Italo. I would recommend his services and this clinic. All of my interactions with them... were professional, friendly and helpful. If you are looking for an excellent dentist who will put you at ease go and see Dr Italo is the one!read more

debbie bergantz
14:23 24 Jan 20
My visit today with Dr. Annie Smith was a very positive experience for me. She was very kind and made me feel so relaxed. Thank you!

Victoria Rifaat
19:08 23 Jan 20
Robiha Nazir the hygienist, is brilliant. I’m a nervous patient & she completely put me at ease, the cleaning session can almost be... described as relaxing, definitely not painful at all. The small touches of putting a lip balm on my lips before she starts work makes such a difference to the experience, no sore cracked lips! She’s extremely knowledgeable & gave me excellent tips & techniques on general dental care.read more

Mikey Ellis
15:59 03 Dec 19
I cannot recommend Dr. Italo enough. He is by far the best dentist I have ever met. He gave me various price options for my treatment and... I'm extremely happy with the results. He has a very friendly manner and puts you at ease during the treatment.read more

Louise Gylsen
21:37 28 Nov 19
Dr Italo is the best dentist I have had and I cycled in the worst traffic across London to come to see him. Caring and compassionate... doctor unlike many, plus highly skilled and innovative. I have been under his care since 2016 and I strongly recommend him as the most committed dentist to patient's satisfaction I have known. And I have known many.read more

Caroline Gration
19:01 13 Oct 19
I now have the most wonderful smile, thank you! Annie and all the staff were so friendly, helpful and professional. The environment is very... luxe spa and I even got to watch a movie whilst the painless treatment was underway. I would wholeheartedly recommend to anyone. Thank you 🙏read more

Gabriel Oprea
14:17 01 Oct 19
Normally I am very anxious and worried when I go to the dentist as I had a few painful experiences in the past but today I had a great... visit at the dentist. First of all, the Clinic is fantastic, modern and the Staff were very welcoming and helpful. Dr Italo was professional and knowledgeable and made sure I was comfortable throughout the check up and treatment. Amazing experience overall and great value for the service provided!read more

Ana Nekhamkin
21:12 24 Sep 19
Cannot believe this is a dental practice, feels more like an upscale spa. Gorgeous facility, incredible knowledgeable staff and very... reasonable prices. Will be coming back for sure!read more

Jessica Merulla
20:31 21 Sep 19
I chipped my front tooth around 10 years ago. Always had it done via dentists who did not care about how my smile looked but instead just... to repaired the chipped section. I was never happy with my smile or gum line, always being extremely self conscious of smiling for photos/being up closer to people around me. I had a couple of other consultations before Italo with other dentists. One whom said a veneer would be the solution, however, I was adamant that this was not necessary. The first consultation with Italo and the team put my mind at ease and their friendly manner made the whole process a simple and stress free one. They explained every possible detail which is what I wanted, Italo was very reassuring, understanding of my insecurity and had the best possible solution. I was extremely excited to see the change in my smile! After my consultation, 2 weeks later I had my appointment. I was nervous but throughout Italo kept me involved in what was taking place. After correcting my front two teeth to be identical and contouring my gums. I must say I could not be happier with my smile!! It has given me extra confidence in every day life. For any dental work, I will be returning and I continue to recommend Italo and the team to everyone I know!! Thank you again! *photo taken straight after appointment.read more

Jason C
22:35 20 Sep 19
I accidentally chipped a tooth during the night, woke up in a panic! Was able to book an emergency appointment to have this rectified... within a couple of hours. The location is excellent, right by Sloane Square. The dental practice itself is very smart, clean and friendly. My dentist was Annie, and I highly recommend her. She couldn’t be nicer and her professionalism, depth of knowledge and expertise is outstanding. You’re sure to come out with a wonderful smile when you come here! I highly recommend this practice.read more

cara-jane Hunter
10:57 23 Jul 19
Outstanding in every way! Fabulous staff, superb cleaning technique. My son's teeth look fantastic after our visit. I recommend this... dentist wholeheartedly! You will not be disappointed with the experience or the results.read more
Next Reviews
The American Smile Dentists website uses cookies to improve your experience. We'll assume you're ok with this, but you can opt-out if you wish. Cookie settingsACCEPT
Privacy & Cookies Policy

Any cookies that may not be particularly necessary for the website to function and is used specifically to collect user personal data via analytics, ads, other embedded contents are termed as non-necessary cookies. It is mandatory to procure user consent prior to running these cookies on your website.